Ball’s solo exhibition “Wind Chill” features in “The View From Here”, surveying a decade of the artist’s work.

JACK BALL IS A PERFECTIONIST. Not the kind interested in clean, sharp lines and distinguishable forms—they are deliberate and intentional in their playfulness, and their work is attracted to obscuring any attempts to identify boundaries between fabric, plastic and skin. This intentional abstraction of objects and environments extends to the way they use their own body as a subject, discouraging viewers from any reflex that might tend towards neat and uncomplicated categorisation. The result is a body of work that embraces the detailed, gritty textures of momentary shapes and light.

Ball embraces opportunities to capture intimate and personal glimpses into their life and their body, positioned within mundane, pleasurable moments. Ball’s playful attitude towards texture and their iterative process expresses an excitement and pleasure in using objects in unexpected and imaginative ways. Their process of collaging these elements of their life involves using whatever hardware, scraps and body parts are available.

Unsuspecting items—swatches of grey, tenant-friendly carpet, a beach tent, reflective tape, fishing lures, dated business shirts—meld into eclectic collages of skin, hair, sunlight and, in Shower Scenes, water that shines like mica dust. “Things are moving and changing within the content as well,” Ball says, “so there are materials that are in transition, oozing or fading.”

For the creation of Shower Scenes, Ball explains they used an amateur underwater camera to capture transitory moments of slowly trickling water. “The pixel texture is crunchy. The backdrops were haphazardly pieced together, and I kept those little details of the set falling apart in a few of the shots, as a reminder.” 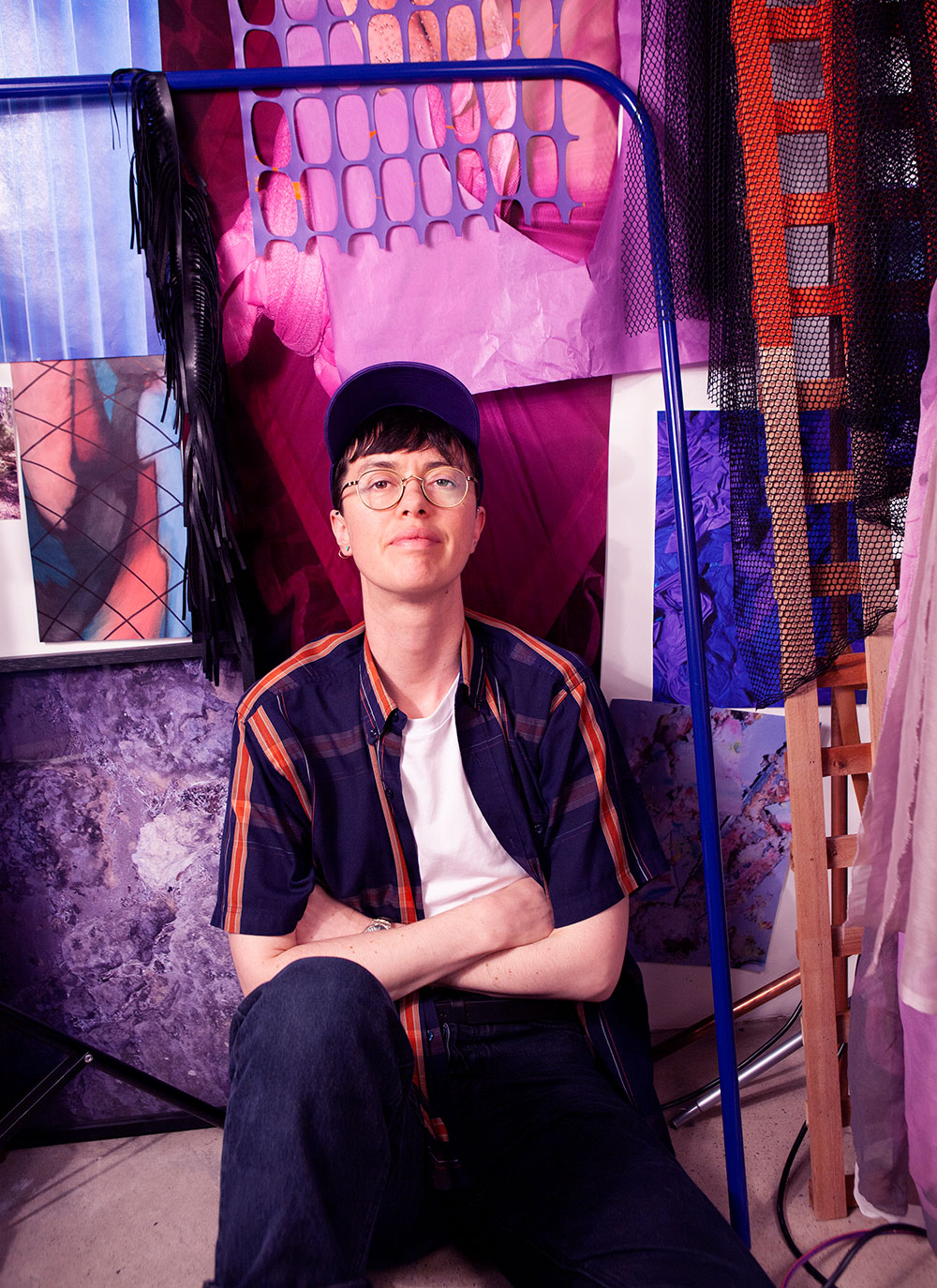 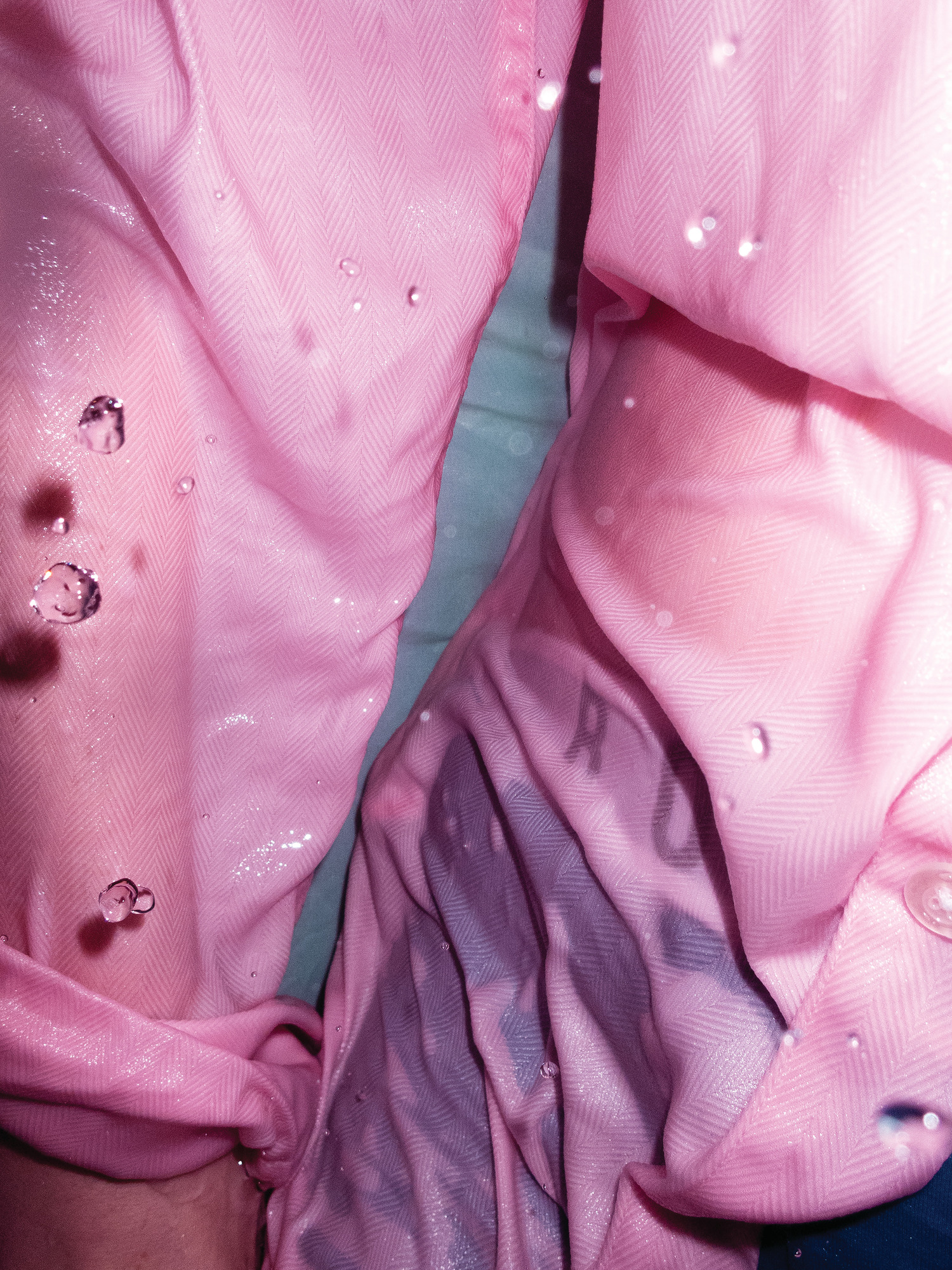 Every print Ball creates is not just a product of flat layers, but complex, interwoven tapestries of reimagined objects and borrowed surfaces. Their library of mauve and magenta is a product of an intricate process of overlapping and stitching, cutting, and folding images. “I want to keep editing, they’re not still,” they say. Once an image is printed, on materials such as low-quality printer paper, cloth or rag, it can be transformed further through a process of re‑photographing.

“I’d layer the image with fabric or another material, and then I shoot it again […] through this process I’m flattening, expanding and embellishing the surfaces. I often re-photograph cheap laser prints, as there’s a beautiful sheen on the paper,” Ball says.

The result is a technicolour whirlwind of both alien and earthly textures. Each new version of a single print introduces a new quality or glance of light. Folds and shadows in paper and fabric are flattened into the next photograph, with some pieces comprising dozens of layers of re-shoots. Themes of “tightness and heaviness, visibility, being seen, or support structures and scaffolding” are all at play in both the method and the end result.

And Ball keeps everything. “I don’t want a clear cut ‘before’ or ‘after’ narrative, as this is so frequently the focus of trans representation in the media,” they say. “I want everything to be integrated and a bit messy, but in a positive, exciting, layered way.” This process of simultaneously “building and undoing” their work creates a kind of photographic sculpture through collage. “I realised that this is what I want to do; that the sculptural doesn’t have to just be in the studio with clay and plaster. The sculptural is my thighs at the beach as well.”

“I don’t want a clear cut ‘before’ or ‘after’ narrative, as this is so frequently the focus of trans representation in the media,” Ball says. “I want everything to be integrated and a bit messy, but in a positive, exciting, layered way.”


Ball also plays with gender presentation and identity across several of their works. In a print titled Date Night from their series PDA, Ball sports a chest-flattening binder, a tie draped around their shoulders, and a trail of hair glued to their stomach from their belly button to the waistline of their trousers. Rounded pools of light illuminate parts of their torso between swathes of pitch-black shadow. “I thought there was a fun playfulness to that. It is drag! It’s like what people have been doing for ages,” they say.

The method of collage lends itself well to Ball’s personal experience with their transness and their desire to chafe against the over-pathologisation and medicalisation of trans bodies and lives. They embrace their body’s ability to transform in the broader context of how all bodies change over time. “All bodies are not stable. […] We’re all ageing, and bodies change for so many reasons. People have scars for so many reasons. It’s good to remind people of that sometimes.”

Ball’s work embraces their own transient and fluctuating nature, collage bringing the flexibility of their body and practice to the fore. The prints in their collection seem to blend into one another; they relate to and inform one another, and combine abrasive textures and fluid moments in time. It’s a celebration of friction.

This article was first published in the print publication The View From Here in October 2021 under the title Indigo Skin.

Max Vos is a queer and trans writer based in Boorloo/Perth, WA. He has a passion for cultural studies, writing, editing, picking apart movies, playing walking simulators and exploring queer themes and culture. 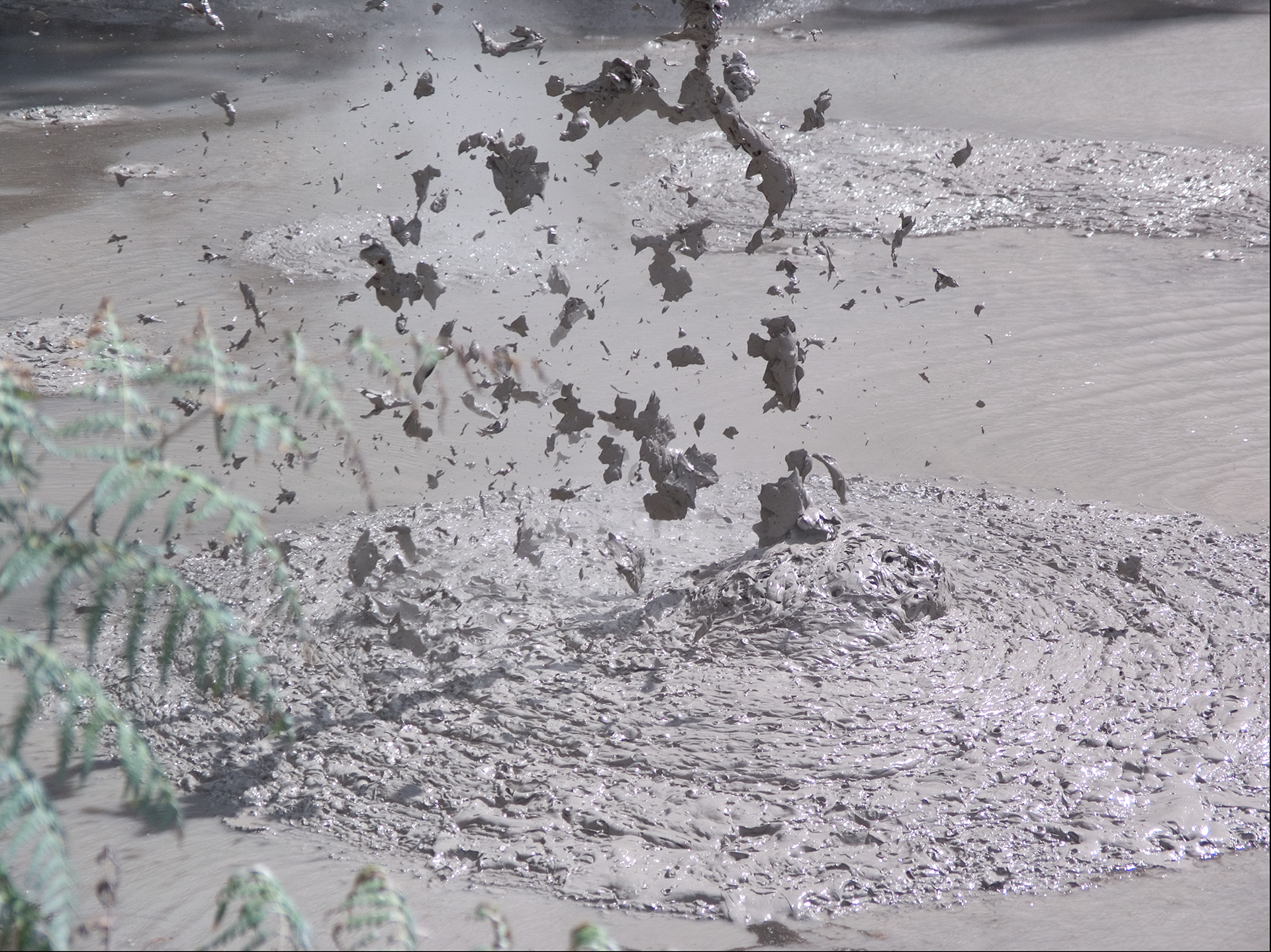 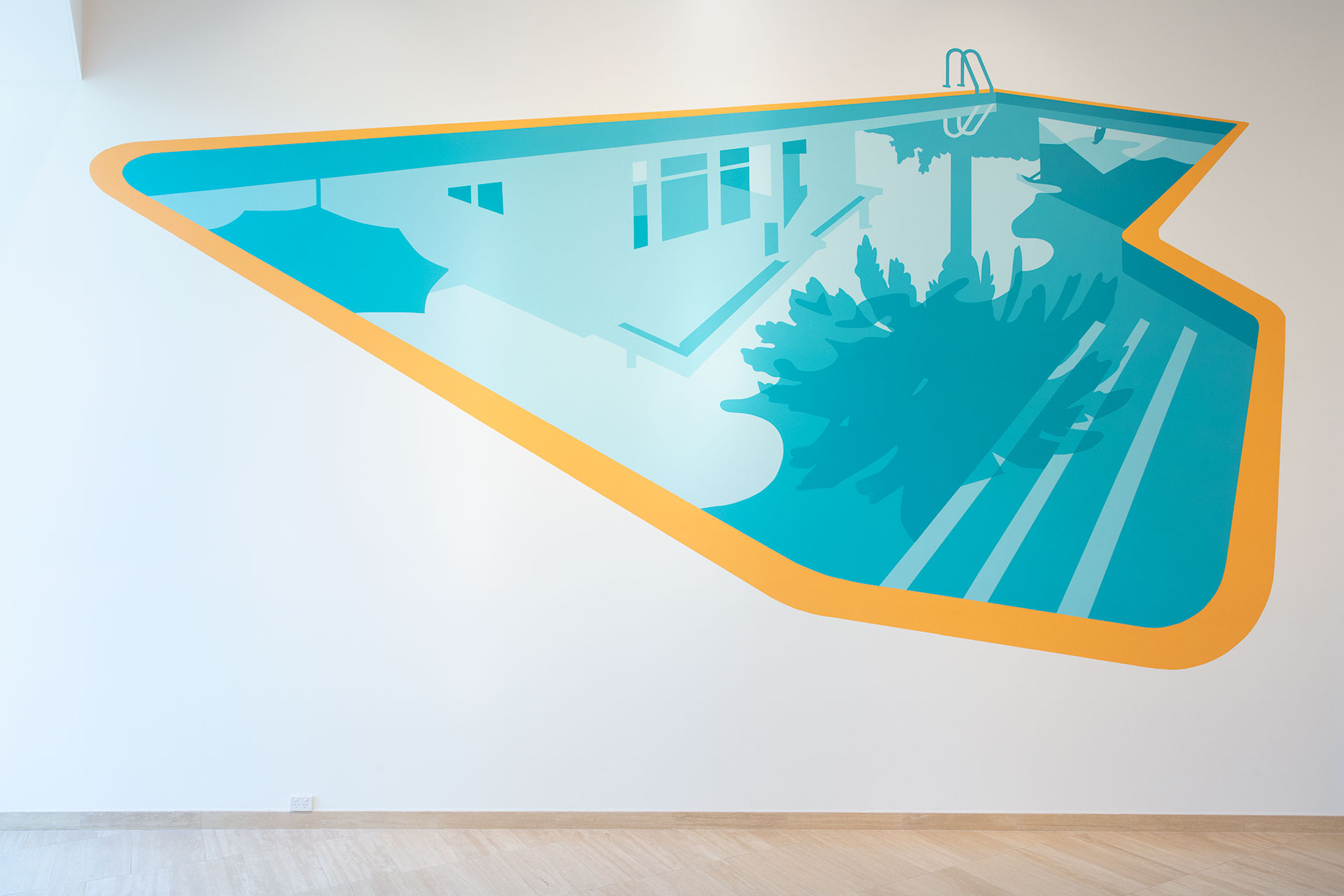 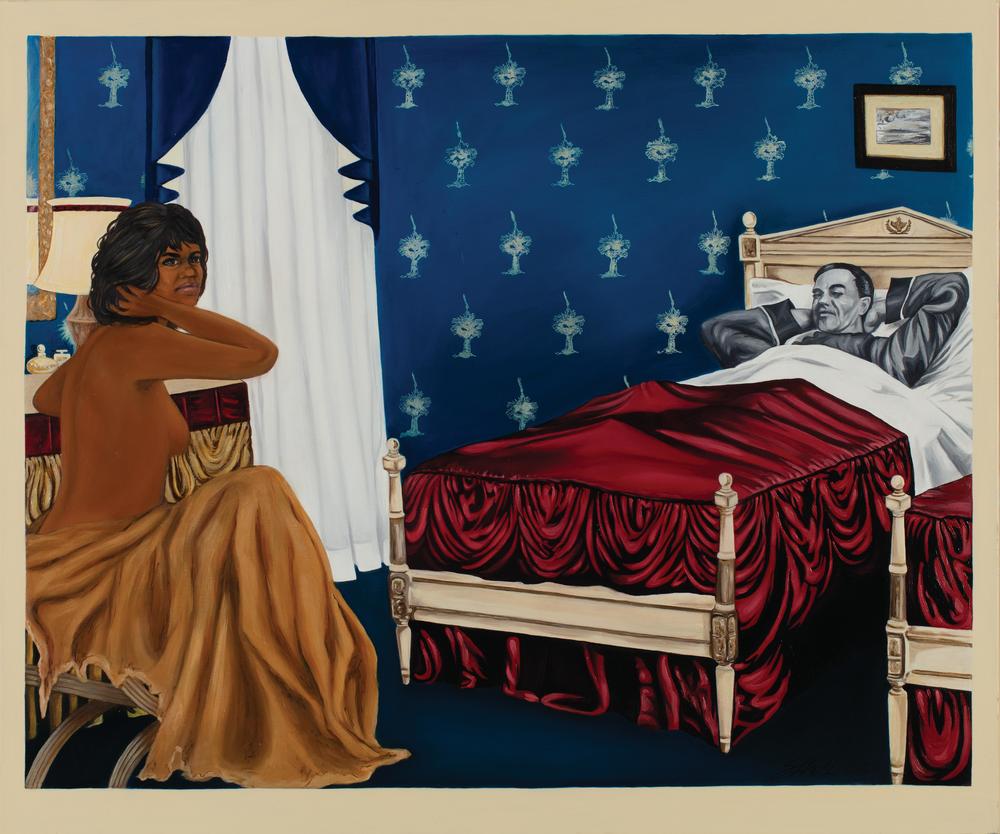