A golden rain cloud made from laser-cut brass hangs from AGWA’s ceiling in Ngarralja Tommy May’s latest work—his most ambitious yet.

NGARRALJA TOMMY MAY’s story is a remarkable one. Here is a man whose life has played out against the violence and displacement of colonisation, and whose life’s work as an artist is insightful, educative and influential in response. Ngarralja is a Wankajonka/Walmajarri man born around 1934 at Yarrnkurnja in the Great Sandy Desert. His 2020 NATSIAA Telstra Award-winning work Wirrkanja propelled Ngarralja to the level of renown an artist of his calibre and significance deserves, but his career as an artist spans many decades. Art has been instrumental in his own survival, but Ngarralja has also played a significant role in shaping the art world for all Indigenous people. Now in his late eighties, Ngarralja could be forgiven for slowing down; instead, he’s breaking new ground.

His new work, Warla, Flat Country (2021), commissioned by AGWA, is Ngarralja’s first major sculptural work. Made in collaboration with Perth-based manufacturer Respoke, Warla, Flat Country is a three-metre wide golden cloud made from laser-cut brass and suspended from the ceiling, with brass chains mimicking rain descending to the floor. The artwork concept was developed through a retrospective analysis of the artist’s rain cloud artworks made on tin. Ngarralja wanted a bold, shiny finish; both indicative of shimmering rain and the grandiose of his personal narrative. Tracing a life lived through two world views, the final artwork is a monument to Ngarralja’s story and his importance in Australian art history.

Ngarralja told me that no one had been properly educated, so in order to feed their families, many men created cultural objects to trade for food and other goods. This was the rebirth of art and culture as a means for survival, communication and healing.

Ngarralja’s journey as an artist is peppered with leadership and innovation. Starting as a printmaker and carver, his early work included figurative “bush men” characters, testament to Ngarralja’s ongoing affirmation of his identity and status in the modern western world. More recently, a handful of artists at Mangkaja Arts in Fitzroy Crossing, where Ngarralja has worked his entire artistic career, started to experiment with carving onto painted sheets of steel. Despite his age and the physical challenges of working with such materials, Ngarralja mastered this new media, creating lustrous visions of his ancestral country, imbued with the energy and magic that is rain making knowledge.

I have worked with Ngarralja as a consultant for some six years. He’d grown to like the tin etching as a medium, and we’d been discussing ways to extend this practice. We started exploring the possibilities of turning 2D works into 3D installations, and since many of his tin works involved things from the real world—like rain clouds—they lent themselves nicely to adaptation.

For most senior artists I’ve worked with, the Ngarrangarni, Tjukurrpa or Dreamtime is experienced, envisioned or interacted with through a deep, interconnected and complex web of ideas and rules that assemble themselves and evolve with time and circumstance. This space is grand and all-encompassing, creating seamless connections between nature and self, between different, changing, but forever-tied forms. As such, Ngarralja’s shift from the two to the three dimensional is not so much ideological as it is technical; he already thinks in the way of change, of shifting forms, and the new physical realisation of that mindscape reflects the continuing growth of his practice. Like his contemporaries around the world, Ngarralja grasps how to utilise the technical skills of others to forge new possibilities in art. Thus, the golden cloud was born, the product of a lifetime of achievement and a timely statement about Indigenous knowledge in a modern world.

Ngarralja grew up on Country at Kurtal, a significant watering hole in the Great Sandy Desert. But he was forced to leave as a young man. In Steve Hawke’s A Town is Born (Magabala Books, 2013), Ngarralja speaks about his journey away from Country: “I was big when I left my country. I was already hunting by myself. My father was dead by this time. He passed away in the desert. We walked to the north, to Lampu well [Well 49 on the Canning Stock Route]. We came to old Balgo mission and spent time walking around Old Billiluna Station, Old Balgo Mission and Paraku (Lake Gregory). Countrymen who were already working on the station. We knew about stockmen already. After living around there for a good while we walked [west] to Jurnjarti; there’s a jila (spring water) there. We sat down on top of the jilji (sandhill) waiting. We were just bushmen, waiting for damper—we were hungry.”

After being removed from the desert, Ngarralja remembers being on a truck destined for schooling when another truck turned up, a station truck. The men were required to get off the education truck and onto the station truck—they were to be trained as stockmen. It was a sliding door moment. The trade of humans, young humans, to be grossly underpaid or entirely unpaid workers is part of the untold history of our modern state.

Working as a stockman was hard, but Ngarralja was good at it. In 2020, I interviewed him for AGWA’s Desert River Sea project, and he told me: “Being a stockman was a hard job, hot heat, Kartiya and Blackfella bosses, they were rough. You had to work hard for your money, otherwise no bed, no food. Young men fella would be taken and learn you for work. We would have one week in town, have a rest, and come back. Hard work. No drunks, no weekends.”

They knew forming a Western-style commerce system through cultural entrepreneurship was essential to meeting the basic needs of their families. The overarching goal was forming organisational structures for the future of all Indigenous peoples.

After the 1967 referendum that saw Indigenous people counted in the Australian population, the Federal Pastoral Industry Award was amended to enshrine equal wages for Indigenous workers. These workers, who had built the pastoral industry, were laid off. The refusal to pay Indigenous labour meant that people who had already been removed from their tribal lands and denied an education were then displaced from the surrounding cattle stations, rendered essentially homeless—with no earning capacity—and forced to live on the fringes of new townships like Fitzroy Crossing.

Speaking recently, Ngarralja told me that no one had been properly educated, so in order to feed their families, many men created cultural objects to trade for food and other goods. This was the rebirth of art and culture as a means for survival, communication and healing. Ngarralja was part of the founding group that formed an adult education centre called Karrayilli, which led to the formation of Mangakaja Arts in the late 1980s. Ngarralja admits he wasn’t a very good painter at the beginning. They were all just learning. But they knew forming a Western-style commerce system through cultural entrepreneurship was essential to meeting the basic needs of their families. The overarching goal was forming organisational structures for the future of all Indigenous people.

What is now known as an “art centre” can be summarised as an Indigenous-owned community organisation that supports the economic and cultural interests of a region or place. With no formal education, Indigenous people and artists working in the eighties had to work out what the rule book would be and what the government would support, to create structures that maintained their autonomy and self-authorship. Ngarralja was part of a working group that travelled the country making history in this way, creating the Indigenous art sector as we now know it. Indigenous art is widely regarded as Australia’s only significant international art movement. 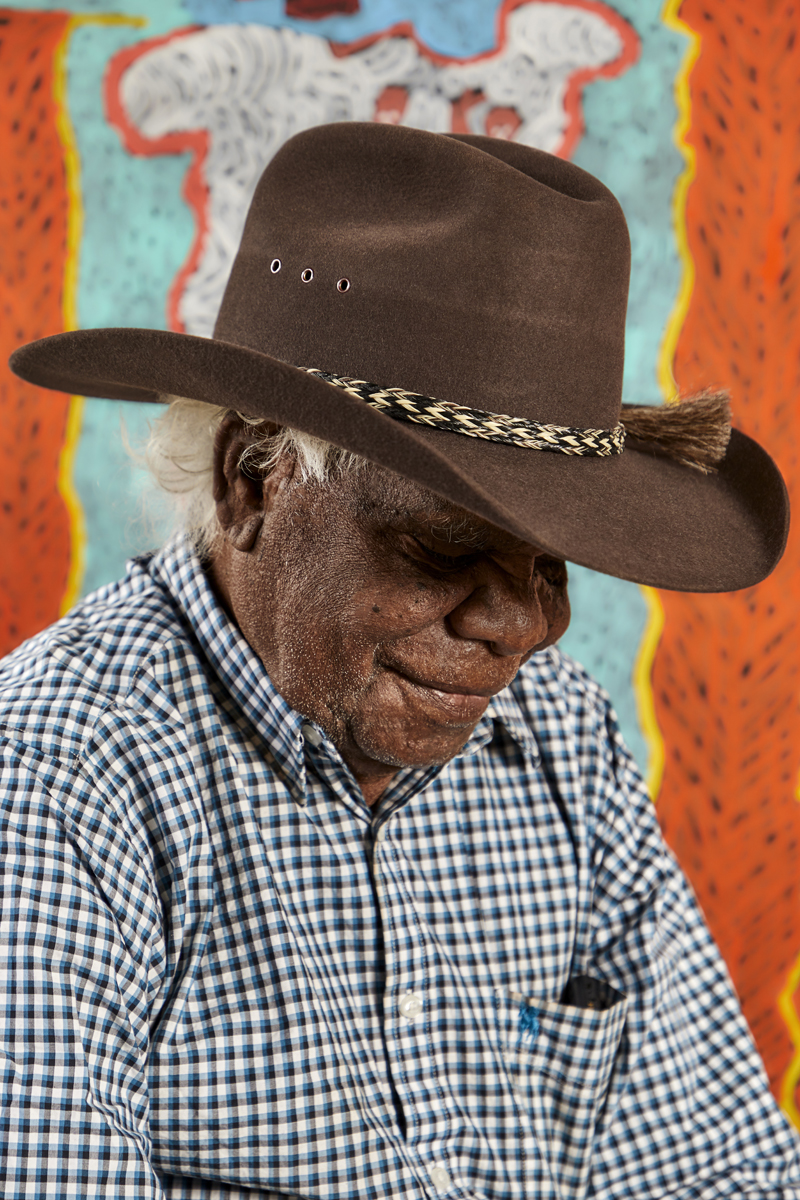 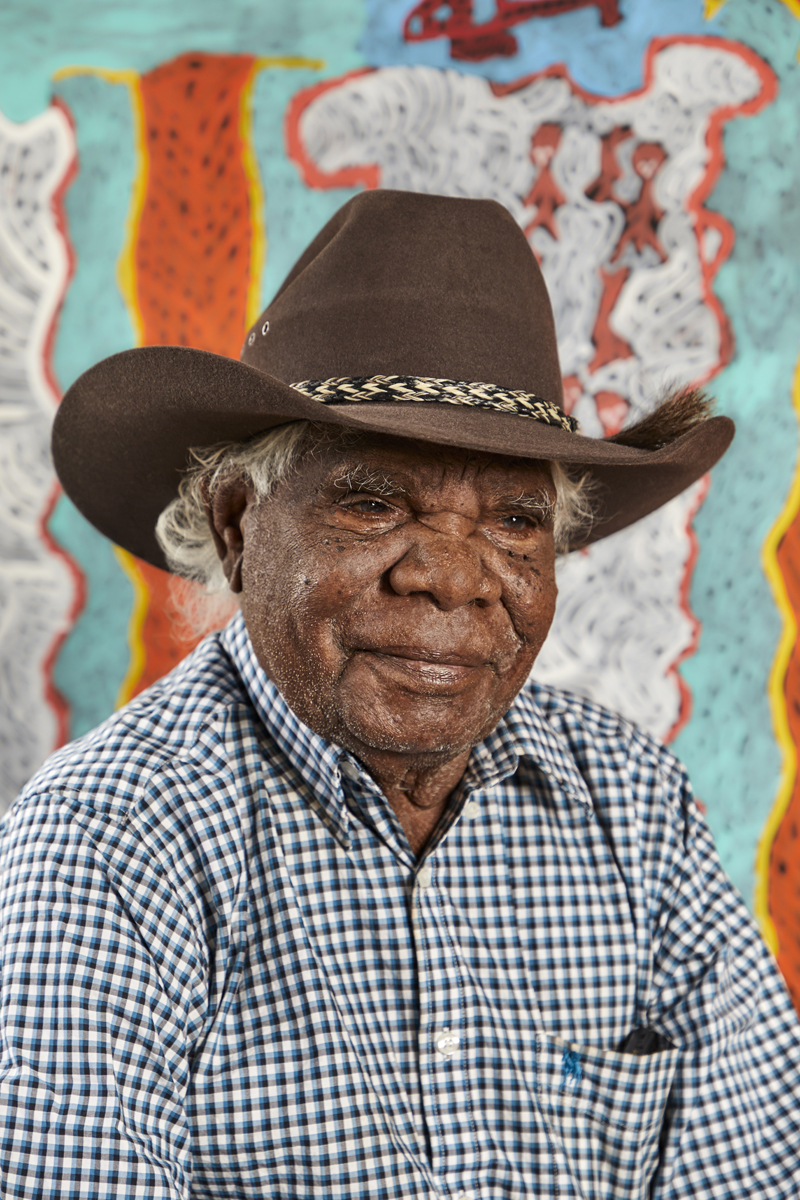 Ngarralja’s leadership has played out in various other ways. He is fluent in Wangkajunka, Walmajarri and English and writes in Walmajarri. He also speaks a host of other languages, acquired through his incredible lore and law-founding travel and research. He is a former deputy chairman and a current director of Mangkaja Arts, a former Chairman of Kimberley Aboriginal Law and Cultural Centre (KALACC) and was an executive director and founding member on the Association of Northern Kimberley and Arnhem Aboriginal Artists (ANKAA) for some 21 years. Significantly, he is one of the only living artists of the historic Ngurarra Canvas, a giant collaborative painting of the Great Sandy Desert, made by more than sixty senior Traditional Owners as Australia’s first official artistic Native Title Document.

Ngarralja creates publicly consumed artwork under a moral ethos of what he describes as “easy stories”, meaning stories that desert people are allowed to paint, general depictions of Country or homelands. Other stories can’t be shared in this way. Strict cultural aesthetic rules govern most Indigenous art—it is believed that you will invoke danger by painting areas that are not within your ancestral rite or that are not for public knowledge. Contrary to what some might think, such rules don’t limit, but rather liberate, artists like Ngarralja. Warla, Flat Country, positions Ngarralja into global dialogues about sustainability, water pollution, climate change and Indigenous systems of taking care of Country. It is significant.

I can’t fathom the deep time worldview of an artist like Ngarralja. I can only hope to understand a fraction of what I am offered. As a writer who has spent most of her career working with desert people across the state, I am forever in debt to artists and thought leaders like Ngarralja who have educated me about the cultural industry in which I participate. We share this incredible place with its original occupants, and yet we are still so far from understanding our shared history. If you’ve ever asked yourself what it means to be Australian, this monumental work perhaps offers a moment to return to that question, to delve deeper, and to go some way to understanding just how much there is we don’t know.

First published in the print publication The View From Here in October 2021.

Emilia Galatis is an independent curator, writer and commercial arts development specialist with more than 13 years’ experience working across urban and remote environments. She has worked with many Indigenous-owned art centres and national institutions to deliver cross-disciplinary projects and major exhibitions. 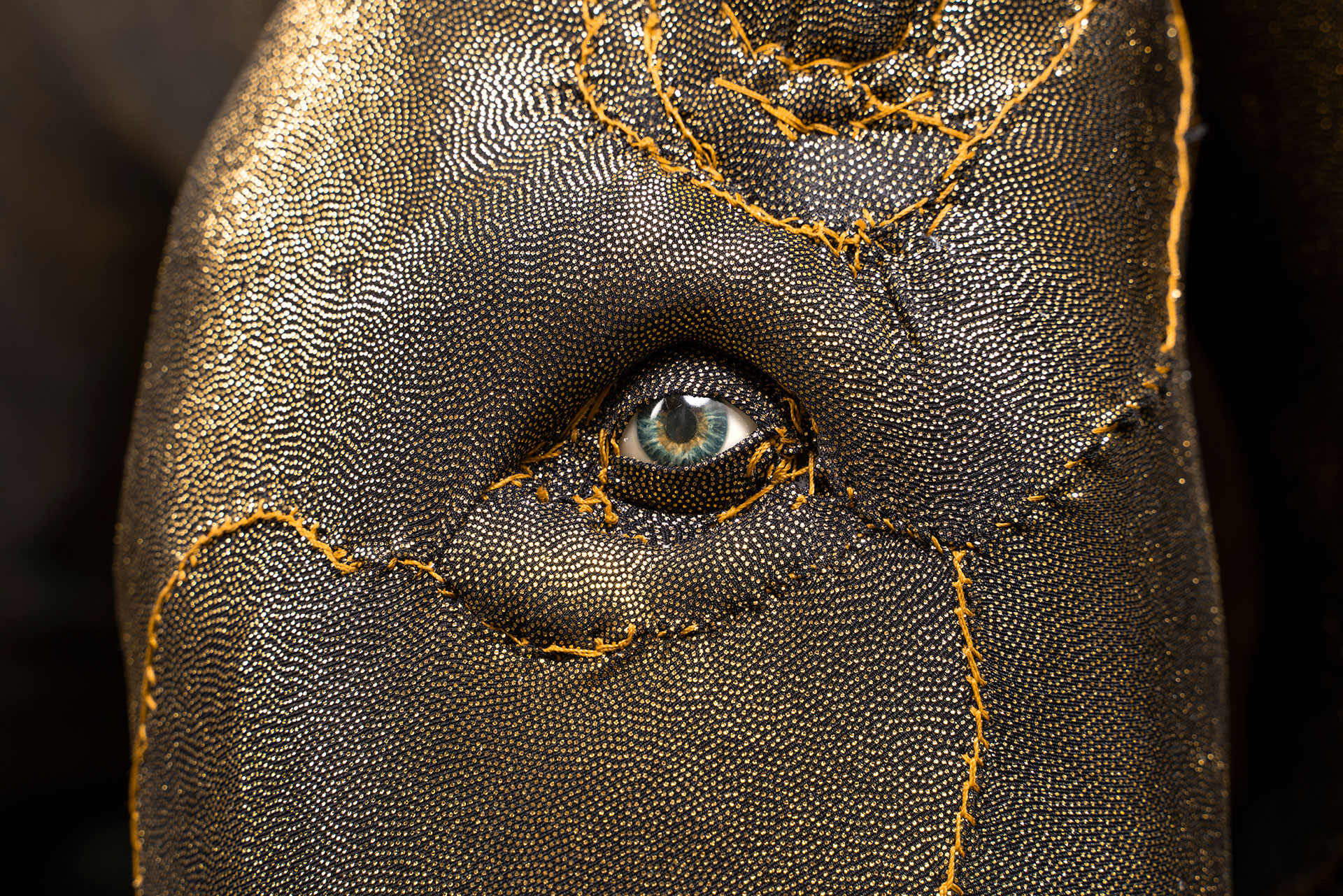 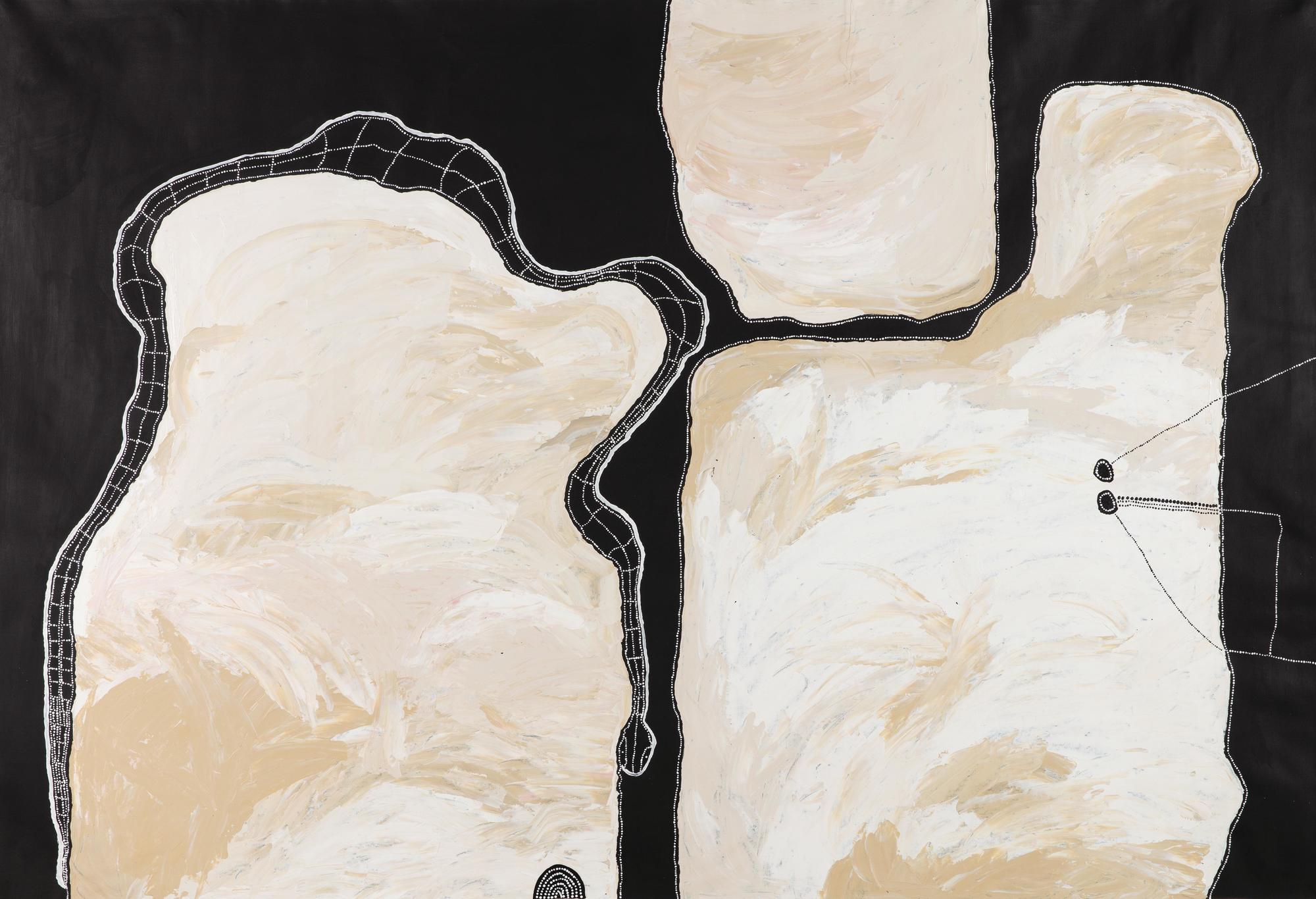 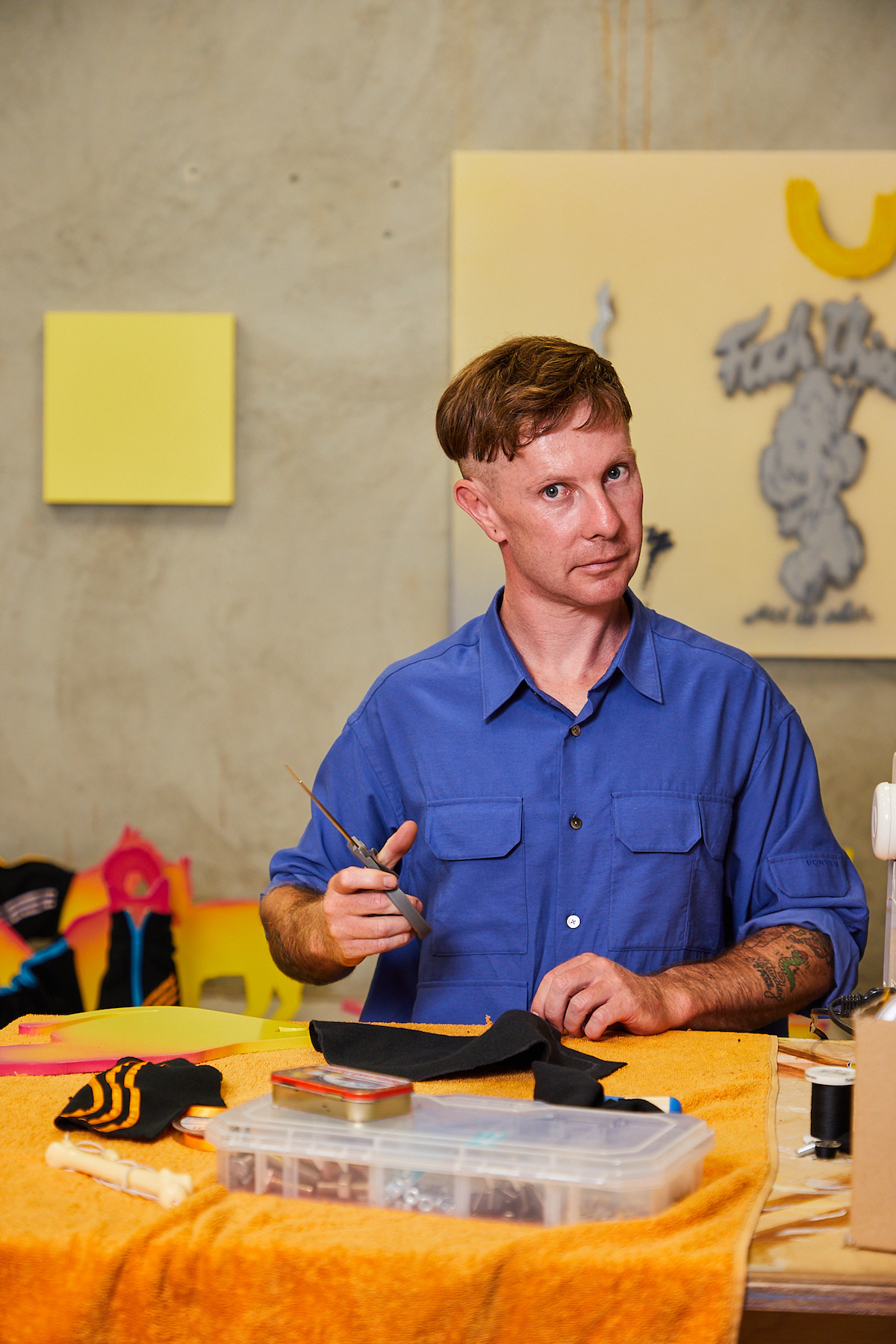