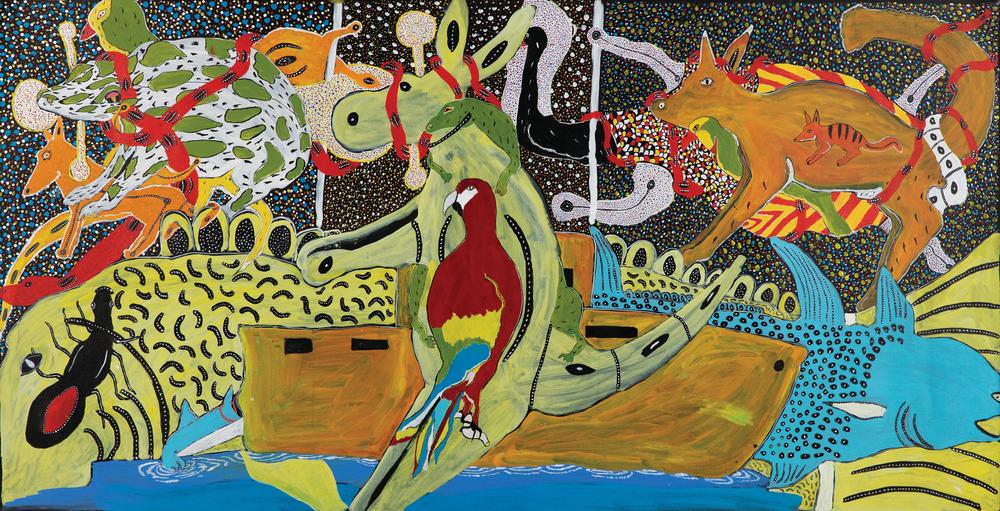 The paintbrush and the written word meet in the work of one of Australia's most explosive artists.

Walmajarri man John Prince Siddon is one of the country’s most uniquely creative artists. His paintings teem with life, bringing together stories of daily goings-on in Fitzroy Crossing, records of historical atrocities that have impacted on First Nations people and the characters from cultural stories passed down generationally between Walmajarri people.

As informed by pop culture as by painting traditions, Siddon’s images are direct engagements with the restless complexity of the given moment. Panic depicts and channels this energy perfectly. In it, an array of animals hustle across the canvas. They are seemingly in flight, crossing land, sea and night sky.

Increasingly important for Siddon is his writing.  Short stories will often accompany a painting, laying out its subjects, but never explaining everything. Instead, his texts exist as parallel artistic expressions. As such, they share the very same energy and impact as his paintings, spiralling out into the world to make new connections and meanings.

“Eclectic, gothic, psychedelic – frankly bizarre … anyone who imagines Aboriginal painting as a matter of ochres, dots and symbols is going to be blown away by John Prince Siddon.” — The Sydney Morning Herald